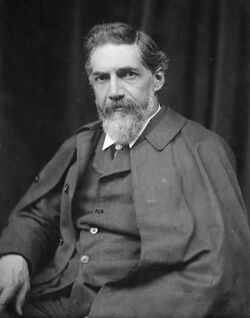 Flinders Petrie is a prevalent figure in the understanding of the formative period of Egyptian History.

...the arm of the Queen of Djer was found, hidden in a hole in the wall, with the gold bracelets in place. The lads who found it saw the gold, but left it untouched and brought the arm to me. I cut the wrappings apart so bared he bracelets all intact. Thus the exact order could be copied when my wife re-threaded them next morning.
When Quibell came over on behalf of the Museum, I sent up the bracelets by him. The arm - the oldest mummified piece known - and its marvelously fine tissue of linen were also delivered to the museum. Emile Brugsch only cared for display; so from one bracelet he cut away the half that was of plaited gold wire, and he also threw away the arm and linen. A museum is a dangerous place….[5]

Retrieved from "https://ancientegypt.fandom.com/wiki/Flinders_Petrie?oldid=9603"
Community content is available under CC-BY-SA unless otherwise noted.