View source
watch 01:36
We're Getting Mutants in the MCU - The Loop
Do you like this video?
Play Sound

Egypt was devided during the Second Intermediate Period. A foreign people, called the Hyksos, ruled the north, while Theban kings (the ancestors of the 18th Dynasty of the New Kingdom) ruled the south. There were probably more independent dynastic rulers during this time, but these dynasties are still a topic of debate in Egyptology. After a period of internal conflict the Hyksos were eventually expulsed and Egypt reunified under one dynastic ruler. This was the start of the 18th Dynasty and New Kingdom period.

Possibly as a result of the foreign rule of the Hyksos during the Second Intermediate Period, the New Kingdom saw Egypt attempt to create a buffer between the Levant and Egypt, and attain its greatest territorial extent. It expanded far south into Nubia and held wide territories in the Near East. Egyptian armies fought Hittite armies for control of modern-day Syria.

The Eighteenth Dynasty contained some of Egypt's most famous Pharaohs including Ahmose I, Hatshepsut, Thutmose III, Amenhotep III, Akhenaten and Tutankhamun. Queen Hatshepsut concentrated on expanding Egypt's external trade, sending a commercial expedition to the land of Punt. Thutmose III ("the Napoleon of Egypt") expanded Egypt's army and wielded it with great success.

One of the best-known 18th Dynasty pharaohs is Amenhotep IV, who changed his name to Akhenaten in honor of the Aten and whose exclusive worship of the Aten is often interpreted as history's first instance of monotheism (and was argued in Sigmund Freud's Moses and Monotheism to have been the ultimate origin of Jewish monotheism). Akhenaten's religious fervor is cited as the reason why he was subsequently written out of Egyptian history. Under his reign, in the 14th Century BC, Egyptian art flourished and attained an unprecedented level of realism.

Another celebrated pharaoh is Ramesses II ("the Great") of the 19th Dynasty, who sought to recover territories in the Levant that had been held by 18th Dynasty Egypt. His campaigns of reconquest culminated in the Battle of Qadesh, where he led Egyptian armies against those of the Hittite king Muwatalli II and was caught in history's first recorded military ambush. Ramesses II was famed for the huge number of children he sired by his various wives and concubines; the tomb (KV5)he built for his sons, many of whom he outlived, in the Valley of the Kings has proven to be the largest funerary complex in Egypt. Still greater military ability, if less self-promotion, was shown by Ramesses III.

The New Kingdom ended because of the Bronze Age Collapse, which saw the whole economic trade system between the empires and even the empires themselves fall apart. A drought in the central/western Mediterrean might have caused crops to fail. This then resulted in widespread famine, chaos and mass migration/invasion (these people were called the Sea People) towards the east (however, this is still a debated subject). Only Egypt and Assyria survived while other empires completely collapsed.

In ancient Egypt the Bronze Age Collapse resulted in a decline during the late 19th Dynasty, which rapidly increased after the murder of Ramesses III, who is often regarded as the last great Pharaoh. 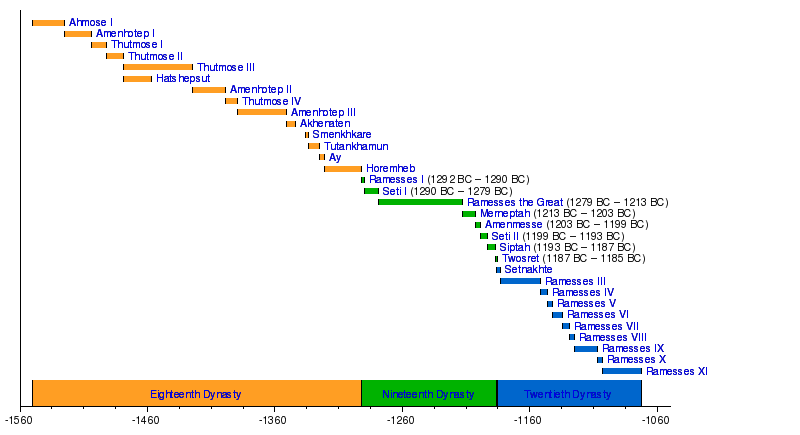